GRAPES OF MIRTH RETURNS TO SEPPELTSFIELD BAROSSA, WITH A BLOCKBUSTER NEW LINE UP! 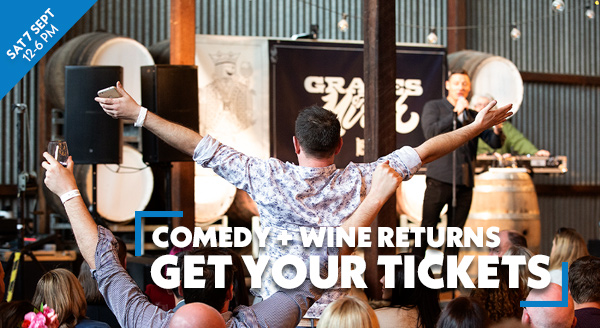 After selling out their inaugural Barossa Valley event in 2018, Grapes of Mirth will return to iconic Seppeltsfield Barossa, as part of this year’s Barossa Gourmet Weekend.

“We’re baaaaack! An all new line-up, same awesome vibes with some special additions. Last year’s event was one of my personal favourites, up until the point that I realised Tommy Little IS NOT a young version of me but I AM in fact an OLD version of him! It’s like the bloody Bupa ads”, explained Merrick Watts – Head Clown at Grapes of Mirth.

Host Merrick Watts will be joined on stage by Dilruk Jayasinha (WINNER Most Popular New Talent – 2018 Logie Awards, ‘Utopia’, ‘Have You Been Paying Attention’); Mel Buttle (‘The Great Australian Bake Off’, ‘The Weekly with Charlie Pickering’, ‘Hughesy We Have A Problem’); Harley Breen (‘Taboo’ – 2019 Logie Nominee, WINNER Comic’s Choice – Melbourne Comedy Festival); And two more comedians to be announced soon – watch this space!
“This year we have a brilliant new bunch of comedians as well as our incredible music master DJ Pedro Moshman, who will be accompanied by two live musicians; Virgil Reality (yes, that’s his real name) on trumpet / flute and The Maverick Experience (no, that’s not his real name) on percussion – they’ll keep the festival vibe going between sets and after the comedy show.”
Comedy (and wine) goers will be treated to an incredible six hours of non-stop entertainment, quality Seppeltsfield Barossa Wines, and local gourmet grub.
Since its inaugural event in February 2017, Grapes of Mirth’s ability to match top shelf wine and comedy has proved to be an overwhelming success, selling out nine events across Australia. Host and founder, comedian Merrick Watts, has championed this winning formula after recognising the value of an afternoon featuring Australia’s best comedians in Australia’s best wineries – an experience that has subsequently seen a steadily growing community of Grapes of Mirth devotees.
EVENT DETAILS:
What: Grapes of Mirth at Seppeltsfield Barossa
Location: Seppeltsfield Barossa, 730 Seppeltsfield Road, Seppeltsfield, South Australia
When: Saturday 7 th September 2019, 12noon sharp start
Tickets: $60 per person + booking fee, link to purchase tickets and return bus tickets available via www.grapesofmirth.com.au
Tickets on sale Wednesday 10 th July, 9am ACST
PrevOlder
NewerNext